VET SERVICES AT THE URBAN HOUND

While we pride ourselves on the extensive measures we take to ensure your dog’s safety, things do happen. If your dog becomes injured or ill while in our care, rest assured that we have the best vet in town on call. When necessary, Dr. Jake Tedaldi is available to visit your dog here at the Urban Hound. Jake works closely with our staff to provide detailed instructions about your dogs care for the remainder of their stay. For your convenience, vet services will be added to your bill and will be charged at check out. 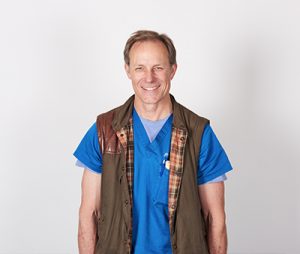 Dr. Jake Tedalidi, DVM is a 1980 graduate of Harvard University, where he concentrated in English and American Literature and Languages. He remained at Harvard as a freshman advisor while working at Massachusetts General Hospital and McLean Hospital for two years.

Jake began his veterinary education in the fall of ‘86 and graduated from Tufts University School of Veterinary Medicine in 1990. From 1990-91 he practiced at Oak Hill Animal hospital in Newton before founding his own practice in 1992. Jake is the solo practitioner of Vetcall, Inc., a mobile veterinary medical & surgical practice serving dogs & cats in greater Boston and its nearby suburbs.

Jake has been voted “Best of Boston” Veterinarian by Boston Magazine twice, first in 2006 and most recently in 2011. In 2008 he published “What’s Wrong With My Dog?” a guide to handling your dog’s health problems. Since 2011 Jake has been a weekly contributor to NECN’s Morning Show as “Jake the Vet”, giving viewers a glimpse of typical home visits. He discusses similar topics during regular appearances on the Kiss 108 “Matty in The Morning” radio show, which he began frequenting in 2005.

Jake lives in Boston with his wife Ruth, their four sons, Max, Luke, Jude, and Dylan, and their Labrador retriever, Bear.

We use Gingr to manage our hotel and daycare reservations. Create an account or log in to get started!

© 2022 The Urban Hound, All Rights Reserved. Designed with love by JSGD.